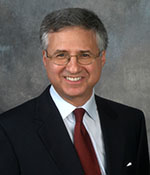 Steve Abrams
Steve is a proponent of public transit because he is a product of public transit. He rode buses and trains growing up in downtown Philadelphia and has been a regular Tri-Rail rider for the past ten years. Steven Abrams has a lengthy record of public service dating back to 1989 when he was elected to the Boca Raton city council. He subsequently was elected to three terms as mayor of Boca Raton, and then served nearly a decade as a Palm Beach County Commissioner, including as the first Mayor of Palm Beach County. Steven graduated magna cum laude in Government from Harvard University and received his law degree from George Washington University. Prior to moving to Florida, he served in the White House as law clerk to the Counsel to President Reagan and current Chief Justice of the United States John G. Roberts, Jr. He is married and has two children.

Questions: Please contact the Harvard Club of Palm Beaches admin at harvardclub.pb@gmail.com or 954-914-3148 for assistance.